Magic mushrooms are still illegal throughout the U.S., despite the fact that some states have begun decriminalizing them for therapeutic use. But what about mushroom possession laws in Ohio?

In this post, we talk about mushroom possession laws in Ohio while touching upon some mushroom laws by state in 2021 and beyond.

Interested in psychedelics? Make sure to check out our other post “What States are Psychedelics Legal in 2022.” 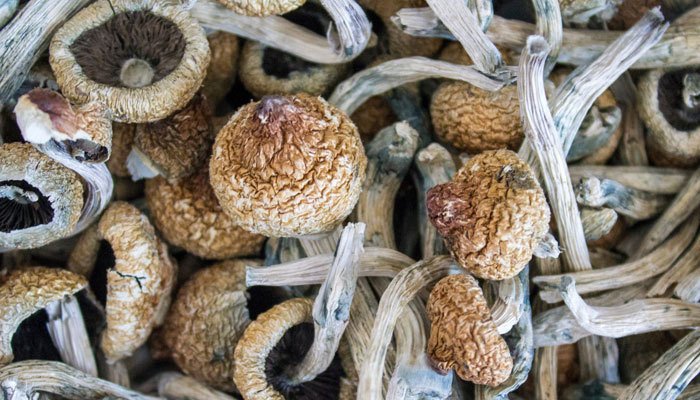 Psilocybin mushrooms, also called shrooms or magic mushrooms, are naturally psychoactive and hallucinogenic. These fungi offer consumers an altered state of mind and change their perceptions of reality.

Some people report experiencing visual and auditory hallucinations, while others describe their experience as spiritual or religious.

Until recently, psychoactive mushroom use was illegal in all U.S. states. However, that is changing.

Medical research has found mushrooms could be effective for treating depression, PTSD, and other mental health disorders. As a result of these studies, some states have decriminalized psychedelic mushrooms for their potential medical benefits.

Currently, most states criminalize psychoactive mushroom use. However, over the next few years, many of these laws will be repealed.

The following states are likely to legalize or decriminalize psilocybin in 2021:

Some cities have signed legislation to decriminalize shrooms, which has allowed researchers to begin exploring the potential medical benefits. These cities include Oakland, Colorado, Denver, and Detroit.

Also important to note is that despite federal prohibition, activists in some states have been pushing hard for more decriminalization. Then, on November 3rd, 2020, Oregon became the first state to legalize psilocybin mushrooms. More research will continue to reveal the medical and therapeutic benefits of these hallucinogens, but we expect more change to come regarding their legality over the next few years.

However, even with this being the case, Ohio still does not allow mushroom possess. Thus, the mushroom possession laws Ohio has in place must be followed to avoid criminal prosecution.

The quick version of Ohio’s mushroom possession laws is that the state does not allow possession, sale, transportation, and cultivation of spores of mycelium that are able to produce mushrooms that contain psilocybin or psilocin. but there’s more to these possession laws than that.

Thus, the spores are not illegal until they’re cultivated to produce magic mushrooms. This is when the psilocybin or psilocin can be detected, and if this is the case, the individual caught with these compounds will face a felony controlled substance charge. But with the introduction of Ohio House Bill 80’s prohibitions, some of this changes.

Through HB80’s provisions, Ohio’s laws regarding possession, sale, transportation, and cultivation of magic mushroom spores or mycelium that’s capable of producing shrooms containing psilocybin or psilocin change. Here’s what the bill does:

Illegal Cultivation of Spores in Ohio

Illegally cultivating mushroom spores in Ohio is a felony in the second degree. This can result in a maximum fine of up to $15,000 and two to eight years in prison.

Trafficking in Spores in Ohio

Illegally trafficking mushroom spores in Ohio is a felony in the fourth degree. This can result in a maximum fine of up to $5,000 and six to eighteen months in prison.

Preparation of Spores for Sale in Ohio

Illegally preparing mushroom spores in Ohio is a felony in the fourth degree. This can result in a maximum fine of up to $5,000 and six to eighteen months in prison.

Possession of Spores in Ohio

Illegally possessing mushroom spores in Ohio is a felony in the fifth degree. This can result in a maximum fine of up to $2,500 and six to twelve months in prison.

Insight into Criminal Cases for Mushroom Possession in Ohio

Over the last few years, there have been a couple of cases in Ohio in which mushroom spores have been sold and purchased online. Since there isn’t any prohibition regarding this conduct, the state did not file any charges.

At this point, the Ohio State Highway Patrol has been involved in around 100 cases per year involving psilocybin mushrooms. This number is likely to increase as popularity expands and research highlights the therapeutic benefits.

Ohio’s mushroom possession laws are clear at this point; if you’re caught in possession of magic mushrooms, you’ll face criminal charges. However, there are still opportunities for those interested in growing legal magic/medicinal mushrooms.

Reiki, Lion’s Mane, and various other mushrooms are quite lucrative to grow and distribute. And since they’re legally used as supplements to treat various ailments, there’s a growing demand that makes this market quite lucrative.

if you’re planning to work with or possess magic mushrooms in Ohio, it’s best to go with the legal medicinal mushrooms. While Ohio is likely to legalize or decriminalize in the future, at this point, there’s no legal business opportunity in the state and consumers face criminal charges if they’re caught with psilocybin mushrooms.