Keep in mind, psilocybin spore legality at the federal level is still not happening. But we’re confident this will change eventually, much like we’ve seen the cannabis industry progress.

In this post, we cover psilocybin spore legality, offer some insight into the future of magic mushroom legality, and explain the technicalities that are allowing magic mushroom spore sales in the US.

Interested in psychedelics? Make sure to check out our other post “What States are Psychedelics Legal in 2022.” 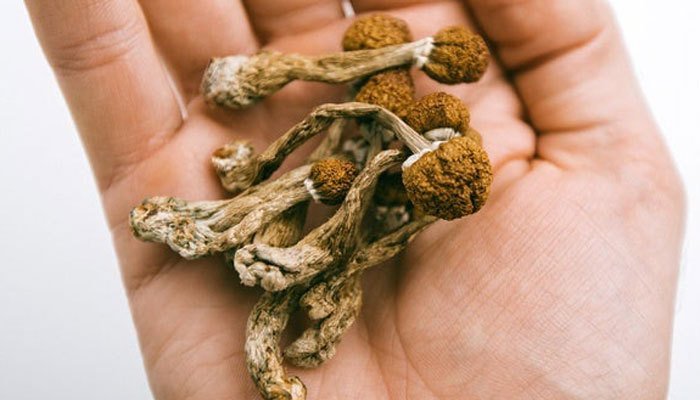 Psilocybin spore kits and grow kits are legal and can be purchased online legally. These can also be openly sold in stores.

However, psilocybin and psilocin still maintain a prohibited status with the federal government. At this point, psilocybin spore kits allow people to cultivate their own magic mushrooms. Since these kits don’t contain psilocybin, they’re technically legal. But there are still some arguments to be had over this idea.

Some even argue that they should have the right to use magic mushrooms for dogs that might benefit from the treatment.

While some argue that psilocybin spore kits are legal to sell, the law states otherwise. Under the Controlled Substances Act, psilocybin is listed as a Schedule I narcotic.

But what about the shroompreneurs looking to sell psilocybin spore kits? This is likely illegal, too.

These kits are drug paraphernalia, which is illegal under the CSA. This includes all equipment, products, and materials used with the primary intention or designed to be used in manufacturing or producing controlled substances. With no other use for these kits than to produce these illegal products, they’re likely illegal.

Aiding and abetting in the commission of a crime is also illegal. With this in mind, if someone who purchased a psilocybin spore kit from a seller gets convicted of producing psilocybin mushrooms, the seller also could face a charge, too.

If you’re curious about psilocybin spore legality, you likely want to understand the laws in each state. States have different laws but more of the regulations in place are comparable to the CSA.

Some cannabis-friendly states have exceptions for selling cannabis paraphernalia. However, the same does not apply to psilocybin paraphernalia.

Decriminalization means the penalties for psilocybin crimes are reduced. A state could decriminalize misdemeanor possession charges to a fine, like ticketing the user instead of arresting them. This is one step away from legalization, which means no penalty or jail time would be imposed.

So far, only a few municipalities in the United States have decriminalized psilocybin. But some states have outright made statements to deter psilocybin spore sales.

For example, in California, they released this statement:

”Every person who, with intent to produce [psilocybin], cultivates any spores or mycelium capable of producing mushrooms or other material which contains such a controlled substance shall be punished by imprisonment in the county jail for a period of not more than one year or in the state prison.

Every person who transports, imports into this state, sells, furnishings, gives away, or offers to transport, import into this state, sell, furnish, or give away spores or mycelium capable of producing mushrooms or other material which contain [psilocybin] for the purpose of facilitating a violation of the law shall be punished by imprisonment in the county jail for a period of not more than one year or in the state prison.”

While it’s illegal for now, we believe the law will change to allow psilocybin cultivation and sales. But as with the cannabis industry, this progress will take time.

So far, we’ve seen some impressive progress moving in the right direction. This includes some states allowing more psilocybin research. This research may hold the key that will change federal psilocybin spore legality.

Municipalities That Have Decriminalized Psilocybin

Psilocybin spore legality in Denver changed in 2019 when legislators decriminalized psilocybin for personal use and possession. The vote was close, but it pushed 176,000 residents to make their case, with 50.6% of voters desiring decriminalization.

Even though psilocybin spore legality in Denver is still not legal, this change in local law deprioritizes psilocybin mushrooms on the list of law enforcement priorities for Denver at the city and county levels.

Within a month of Denver’s success with Initiative 301, Oakland’s city council voted for the decriminalization of psilocybin and other psychedelics from other plants and fungi. This includes peyote and ayahuasca. This time, the vote was unanimous.

Oakland no longer charges users for psilocybin possession, but lawmakers have not legalized psilocybin sales. Furthermore, Oakland residents cannot possess any of these hallucinogenic substances on any school property.

Once Denver and Oakland decriminalized psilocybin, Santa Cruz did the same in 2020. This was yet another unanimous vote.

Similar to the Oakland decision, Santa Cruz decriminalized psilocybin and other plant- and fungi-based hallucinogenic susbtances. But the main difference here was that the motivating force was psychedelic applications for addiction therapy.

New Mexico state’s Court of Appeals decided to change psilocybin spore legality. It concluded that growing these mushrooms is not banned under the state’s anti-drug manufacturing laws.

Federally speaking, psilocybin spore legality isn’t where we’d like it just yet. But we believe this will change as time progresses.

At this point, traveling outside of New Mexico with these substances isn’t recommended. While someone in the state can take advantage of psilocybin spore legality, you cannot grow them outside of the state’s borders.

When Will Psilocybin Spore Legality Change at the Federal Level?

At this time, psilocybin spore legality in the United States is limited to New Mexico state law. The federal government still classifies mushrooms and other plants containing this substance as Schedule I drugs.

We believe that all of this will change with time. This includes psilocybin spore legality, decriminalization, and even legalization efforts. The time is coming, especially with studies showing psilocybin might help people with depression, anxiety, and other ailments.

As more research is conducted on psilocybin, expect activists to push for its legalization across all fifty states. Those working in the field of psychedelic therapy are hopeful about these results and want to expand their efforts to reach others who could benefit from treatment.

Looking to expand your legal mushroom business? Northstar is ready to help!

We’re ready for the legal psilocybin marketplace, and when it comes, we plan to be the go-to for scaling psilocybin-related operations. Contact us now to speak with one of our experts about how we’ll grow your company with the right financial insights.